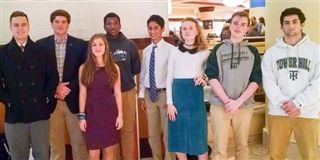 Model UN to Compete in DC

2/14/2017
Tower Hill's Model United Nations club will end this year's competition at the North American Invitational Model United Nations (NAIMUN) conference in Washington, D.C. from Feb 16-19. Rory Britt has constructed the club from the grassroots level, earning "Most Outstanding Delegation" for the team and "Best Delegate" for himself at the Empire MUNC competition at NYU this past fall. The team just returned from Philadelphia, where most of the delegates represented North Korea at University of Pennsylvania's ILMUNC. Rory was chosen to participate in an elite competition staged directly after World War I. Tower Hill's Model UN club would like to thank. Mr. and Mrs. Britt who volunteer their time and effort, facilitating the success of the club.

—Jason Toy, US History
Back