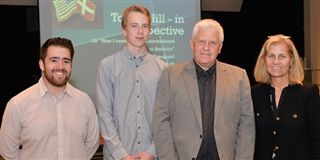 4/6/2017
by Kathy Warner, Director of Alumni Relations
This article appeared in the Spring 2017 issue of the Tower Hill Bulletin magazine.
In 1975, 17-year-old Soren Kjaergaard, who was about to start his senior year in high school in Denmark—the only place he ever lived—thought he might take a chance and become an American Field Service (AFS) student for a year of school in America. He had no say in where he would go, but fate brought him to Wilmington, Delaware, and a school named Tower Hill. Little did he know that this luck of the draw would introduce him to a Wilmington family he has never lost contact with; a school where he still returns to attend his reunions; and friendships from peripheral to lifelong with his twelfth-grade THS classmates and teachers. Kjaergaard calls this his “meeting with America.”
Kjaergaard is a familiar alum to those of us who have been around Tower Hill for a few years, despite the fact that he lives in Denmark. It’s not just that he returns to his alma mater regularly, but he has a big, outgoing personality, is never at a loss for words and is eager to engage with all—whether it is stories about sitting at the lunch table, making the team vs. occupying the bench, teacher expectations or extracurricular life at THS in 1975-1976. This year as he returned for Homecoming Weekend for his 40th Reunion, he was accompanied by his 16-year-old son Kristian Emil, who is a junior in Denmark and considering an exchange experience of his own.
Kjaergaard is a strong and steadfast advocate for the AFS experience. He feels like high school students are at a peak in terms of curiosity, sociability and learning ability. They have reached an age and a level of maturity where they are able to fathom a world outside their own. They are beginning to think of college and the notion of moving away from home, so they are open to the world and the thoughts and experiences that travel makes possible. Kjaergaard met with Head of School Bessie Speers, and the two of them found that they agreed about the importance of travel and the tremendous impact it can have on a student’s educational experience.
“As my eyes were opened to the American way of life—dress code, legendary teachers, sitting at the ‘jock table,’ Grace’s famous sticky buns, Gatorade, SATs and competition on the fields as well as the classroom—in a small way, my presence at THS made my classmates think of a way of life different from their own in another part of the world,” he said.
After attending Tower Hill, Kjaergaard finished his schooling at his Danish high school, Hasseris Gymnasium, in his hometown of Aalborg. He obtained his master of laws degree from Aarthus University, and some years later, he also earned a master of law degree from Duke University. He initially worked as an attorney and later as an executive for the National Road Authority.  For the past decade, he has worked as a consultant and contract manager on major projects. He is happily married and the father of two grown daughters and his son.
Before all the reconnections with classmates and teachers and the many events over Homecoming Weekend, Kjaergaard was able to talk to Tower Hill’s Upper School students and made a persuasive argument “to seek and take the opportunity to go abroad for a semester or two. Don’t be afraid to be uprooted.” As we expected with his engaging personality, Kjaergaard entertained and amused his audience with anecdotes of his days at THS in the mid-1970s.  But hopefully he also inspired students to take a chance and add some international experience to their high school years.
Back