Global Initiatives
Date Posted
No comments have been posted 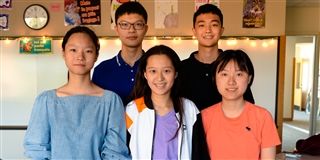 5/9/2019
By Eduardo Silva, Director of Global Initiatives
This article appeared in the Spring 2019 issue of the Tower Hill Bulletin
It has long been a tradition at Tower Hill to open our doors to the world. The way in which this has been done and the individual experiences, of course, have evolved significantly. Gone are the days in which students wrote letters home and occasionally spoke with loved ones through an overseas operator. As a reflection of how much the world has changed, today our international students are able to connect to home with tools such as Skype, FaceTime and iMessage. Nonetheless, and despite the world feeling like a much smaller place, Tower Hill continues to attract high-caliber students from around the world who seek a taste of what an American school has to offer.
Tower Hill first established an official and sustained international student program in the fall of 1953 through a partnership with the American Field Service (AFS). The AFS program, still in existence today, is a leading exchange program that has grown to every inch of the planet. Through the partnership with AFS, Tower Hill welcomed students from Norway, Ecuador, Brazil, England, the former protectorate Northern Rhodesia and Finland, among others. Though the country from which students came varied as the years went by, one thing remained: Tower Hill always sought to make the exchange valuable to all involved. Visiting students received a top-notch education, made new friends and built lifelong relationships with their host families.  Meanwhile, Tower Hill received invaluable perspective and diversity of thought in its classes, on the fields and in its extracurricular activities.
In 1960, the first-ever edition of The Bulletin was published. Malcolm Coates was head of school, the new third-floor addition was completed over that summer to accommodate more Middle School classes and French had just been added to the curriculum in the Middle School. In this inaugural issue, we also met Kjell Johannessen, one of Tower Hill’s first AFS students hailing from Norway. When asked about what school life is like at Tower Hill compared to back home, his response epitomized the sort of feelings that, even today, an exchange program hopes to offer: “...at Tower Hill the relationship between teacher and student is closer and more satisfying.” And as to the academics? “Kjell has taken six years of English at school in Norway, but of course he has found that thus far academic assignments have taken him somewhat longer than expected, especially those in United States history.”
Years later, in 1979, Graciela N. Placci, from Argentina, was also asked about her experience at Tower Hill. Despite the years between Kjell’s and Graciela’s responses, it still demonstrated the true spirit of what these experiences were always meant to be. “Then I started at Tower Hill—a different system of education, so hard and weird for me in the beginning, and now so familiar... Here at Tower Hill I receive a lot of help from the teachers or my classmates, and I really appreciate that.”
The last AFS student to join Tower Hill arrived in the fall of 2004. As global trends shifted and the demand for diploma-seeking programs increased, Tower Hill sought to continue the spirit of what AFS had brought to the community, but with a different approach. In 2014, Tower Hill began to accept students from China for a diploma-seeking program. These programs are becoming an integral part of independent schools throughout the country. The goal is to offer not just a one-year experience, but rather a longer, sometimes even four-year experience that mirrors the progression a typical American student would follow in the Upper School. Judy Chen ’16, Allen Wu ’17 and CC Teng ’18 are but a few of the more recent international alumni of Tower Hill who left their marks on our community and paved the way for future international students to follow in their footsteps.
The fall of 2016 saw the arrival of a new international student program that echoed the same structure of the AFS program in that it lasts only a year. ASSIST is a nonprofit organization that matches students, known as cultural ambassadors, to independent schools around the country. With students from Germany, Lithuania, Hungary and the Czech Republic, this program has quickly made itself a staple of the Upper School and rounds out the current international student population. This year, we are fortunate to have Kotryna Leitate ’20 from Lithuania and Julius Quandt ’20 from Germany. Living with Tower Hill host families, these students have jumped right into the junior class and are already making a name for themselves both in the classroom and on the fields.
As Tower Hill enters its second century, one thing is certain: Tower Hill will always be a school that embraces and invites the world in. Even though study abroad programs evolve and trends in international schools abroad continue to rise, the school is poised to establish itself as a leading partner in global education.
And as a testament to the old saying that some things never change, history is still today one of the core academic subjects that initially takes our international students a little longer each night to complete. Fortunately, resiliency and a drive to succeed have also transcended time and continue to be at the heart of every one of our international students.
Back