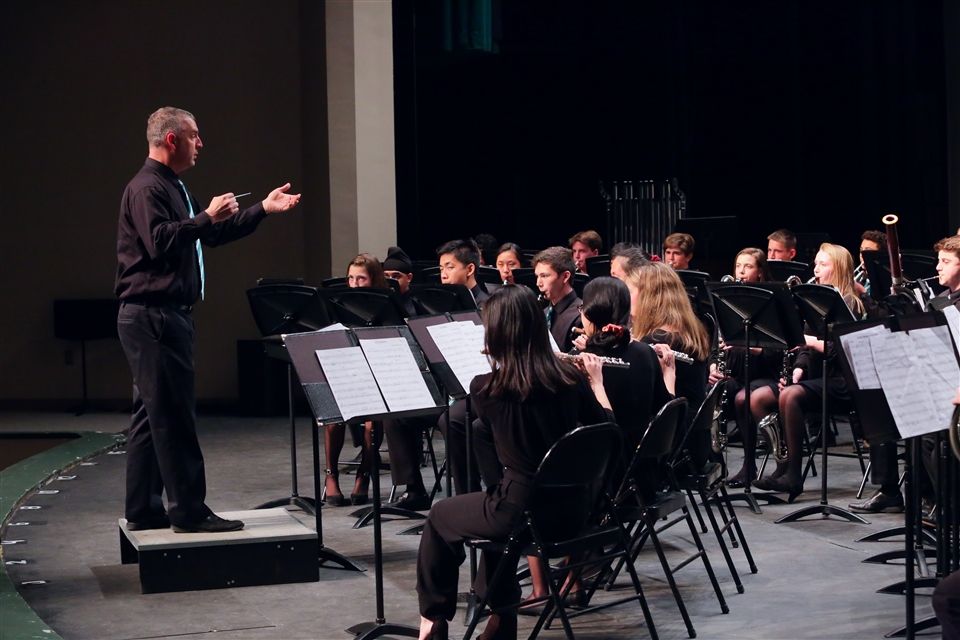 9/21/2019
by Drew Keim, Music Department Chair
Mission statements, mottos, slogans, philosophies … Every great organization has at least one of these in some form or another. Music ensembles are no different, either spoken, written or only in thought and practice. I once worked with a group that desired to create a statement that described what it took to be a successful band. The process started much like one would expect: brainstorming all of the positive attributes of groups that they hoped to emulate. Students began by identifying key characteristics through simple descriptive language that answered our key question, “What makes a band great?” After a plethora of ideas were written on the board, the student leadership focused on three simple words: effort, energy and enthusiasm.
In music, as with most things in life, great things only happen when one (or ideally, the whole) puts in enormous amounts of effort. Practice, both individually and as a full ensemble, is paramount. Focusing on making the most minute of details as close to perfect as possible takes effort … and lots of it. “Simply being ‘good enough’ is never enough if you want to truly succeed,” stated one young, timid, freshman trombonist. “We are going to have to push beyond the high expectations that the director and the other members of the professional staff set for us if we were to be successful.” All of the students understood this and showed at every single rehearsal that they were willing to put in copious amounts of hard work and effort over many long hours of practice.

Energy, the fuel that drives all progress, is just as important for musicians as it is for athletes, contrary to popular belief. It is easy to fall into that whole mentality that music is easy and not physically demanding; society tells us this in hundreds of movies and television programs. The cardiovascular and muscular control that is required to excel in the performing arts is right up there with top-tier athletic programs. What’s more is that everyone in the ensemble has to give 100% at all times since there is nobody ready to “come off the bench” if someone is having a bad performance. We all rely on the collective, absolute focus of every member every time the baton is raised.

Passion for one’s craft helps to inspire increased amounts of effort and energy. The need for enthusiasm in the creative process is often hardest to conjure and maintain. Think about it: In any core subject, one must pay close attention to new material, and students are routinely assessed on their knowledge and understanding. In sports, teams practice for a couple of weeks before competitions begin. For musical ensembles, it is not uncommon to rehearse for weeks on end, sometimes for a three- or four-month long period, before one performance (or two if they’re really lucky) is presented to appreciative audiences. Emotional highs and lows are the norm throughout the process, highlighted by the frequent success or struggles of mastering a new concept or tackling a difficult passage in the music. It is imperative, however, that at the heart of every performer, the desire to enthusiastically create is never lost.

“Effort, Energy and Enthusiasm” quickly became known as the “Tri-E” (pronounced “TRY”) Method and became a pseudo battle cry at the beginning and ending of each session. As our senior drumline captain stated, “Nothing great will ever be accomplished if we don’t even try.”