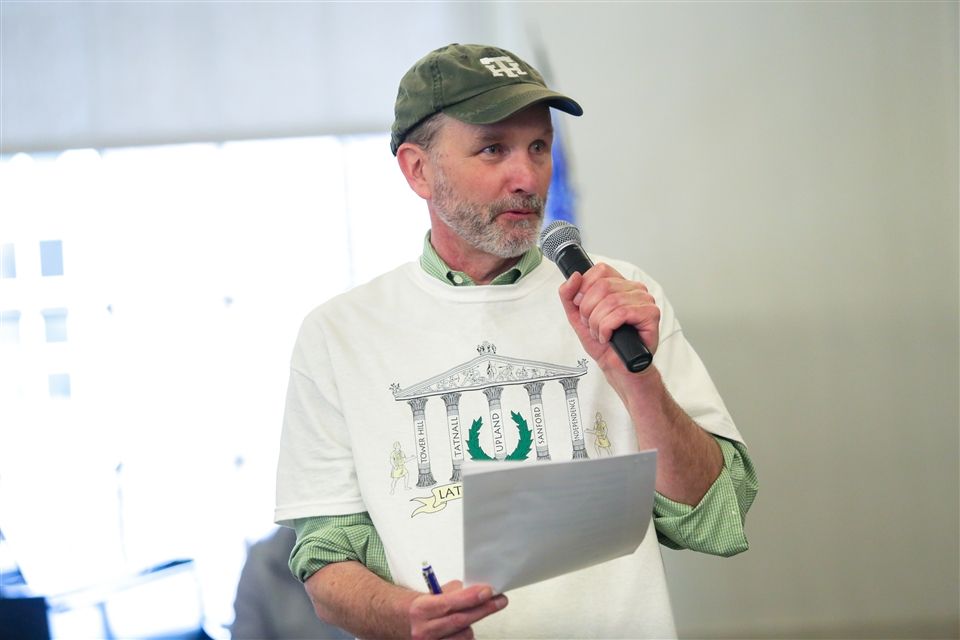 Language Learning and a Talking Statue

9/21/2019
By Harry Neilson, Ph.D., Middle and Upper School Latin
The final evening of the 2018 Tower Hill Rome trip, a student asked me to take him to a fragmentary statue called Madama Lucrezia to attach a note he had composed in Latin. I had taught the group earlier that in Rome there are six “talking statues” used by Romans since the Renaissance to post anonymous, often satirical commentary on life and current affairs. As we hurried through the drizzle, squinting against the headlights of the frenetic traffic in Piazza Venezia, the student never saw my tears of joy, for I was profoundly touched by this gesture that was the fruit of his language study at Tower Hill.
Tower Hill’s founders understood that language learning has been a building block of education since antiquity. Indeed, ancient Roman fathers sent their teenage sons off to Athens or Rhodes to learn Greek, like our college year abroad. Beginning in the Medieval period, the primary purpose of a grammar school was the teaching of Latin and Greek grammar. Until the 17th century, Latin was the lingua franca of Europe’s great thinkers. The classical languages recall the solemnity of ancient learning and are the reason why even today educational institutions define themselves with Latin or Greek mottos such as Tower Hill’s own, Multa Bene Facta.

Great joy can be found in mastering a new language, and the benefits are numerous. It enables the brain to think differently, and, like an actor taking on a role, a foreign language speaker acquires a different personality, or as some have said, a second soul. In extreme cases, fluency in a second language has the power to transform a taciturn introvert into a garrulous extrovert. Furthermore, to become a responsible global citizen, learning a second language is essential. Because language is the door to the way a culture thinks and acts, it solves one of the greatest mysteries of humanity. In addition, the warmest compliment that one can pay another culture is to exert the effort to learn its language; only then can true empathy for that culture occur. A translation can never provide the full experience of a language’s original meaning; it is and will always be an imitation.

Learning a second language is as important now as it was in the past. In a universe dominated by technologically advanced modes of communication requiring no human contact, because language learning requires face-to-face verbal exchange, it allows for authentic interpersonal relationships. Furthermore, language learning is by nature interdisciplinary as each language is a reflection of its culture, and each language shares traits with the other languages of the human family. As is the case at Tower Hill, whether Spanish, Mandarin, French or Latin, in order to learn a second language, a student must compare and contrast aspects of their mother tongue with the target language.

That drizzly night in Piazza Venezia, as the student affixed his note to others on Madama Lucrezia, I saw that he had hand written, homines ubique sed non humanitatem video (“I see humans everywhere, but I don’t see any humanity.”) Having taught this exceptional young man Latin for four years, I understood that learning a second language had already provided him with the tools to enter adulthood a sensitive and analytical thinker. This is one of the best rewards a teacher could receive.