About
Date Posted
No comments have been posted 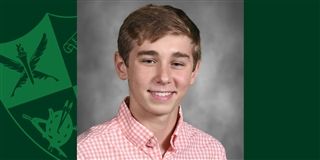 5/14/2020
Will Zakielarz '22 was honored as a runner-up in the inaugural New York Times STEM Writing Contest. The New York Times STEM Writing Contest challenged students in high school to explain or delve into inquiry around a STEM concept that shapes the way we live our lives. Students were allowed 500 words to describe their chosen topic in a way that was both scientifically accurate and nuanced but also digestible for a general audience. The paper received 1,618 entries on topics ranging from medicine to astronomy, psychology, chemistry, biology and physics. Forty-four students were honored for their work, including eight winners and 14 runners-up. Congratulations to Will on this huge accomplishment! Read his essay below.

If you have ever seen a science fiction movie, you may recognize black holes as a terrifying place of no return. With their immense gravitational pull, even light can’t escape. Black holes, the universe’s destructive phenomena that warp spacetime, don’t emit anything – or do they?

Studies from the early 2000s tell us that sound waves can actually come from these dark behemoths. But if nothing can escape one, how can sound? The truth is that black holes indirectly send off waves, affecting their environment rather than the matter that enters it. In 2003, NASA's Chandra X-ray Observatory recorded pressure waves coming from the Perseus cluster of galaxies, 250 million light years away. This cluster was a prime target because of the easy-to-detect x-rays coming from it. There, a massive black hole creates oscillations that travel through the gas cloud around it. The recorded sound is “the lowest note in the universe,” according to Dr. Andrew Fabian, an x-ray astronomer. While the lowest note a human can hear has a period (or the time needed for a complete vibration) of one-twentieth of a second, these waves have a period of 10 million years. Researchers have decided that the note is 57 octaves lower than the middle-C on a piano and estimated to be a B flat. We, as humans, will never be able to hear this pitch due to our biological limitations; however, the knowledge about black holes’ behavior can help us understand greater concepts about the universe.

Researchers believe this discovery will lend insight on the formation of stars and their respective galaxies; previously, scientists didn’t know why the gas in the Perseus cluster hadn’t cooled over 10 billion years and formed stars. We now understand that the waves from black holes are eventually absorbed as heat, keeping the gas hot. While the sound of a black hole probably won’t be used in any music, it’s extremely useful to further comprehend the nature of star creation and even the theory of relativity, which encompasses theories about gravitation and its relationship to other forces of nature. Scientists are now directing their efforts to gas clusters similar to the Perseus one in order to gather more data on these inaudible waves.

Kettley, S. Black hole recording: The sound of a black hole REVEALED and it sings in B Flat. https://www.express.co.uk/news/science/1112855/Black-hole-recording-sound-of-black-h ole-sound-waves-black-hole-picture-NASA-space-news (accessed Feb 18, 2020).

Overbye, D. Music of the Heavens Turns Out to Sound a Lot Like a B Flat. https://www.nytimes.com/2003/09/16/science/music-of-the-heavens-turns-out-to-sound-alot-like-a-b-flat.html?searchResultPosition=13 (accessed Feb 18, 2020).