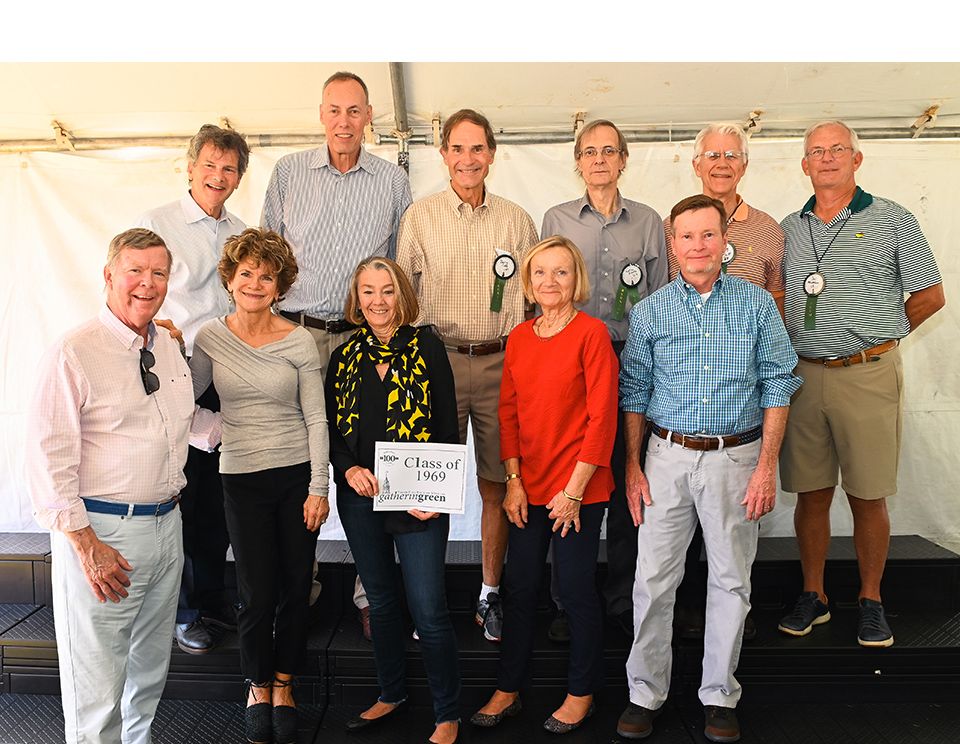 10/13/2020
By Melissa Pizarro, Associate Director of Advancement
The Class of 1969 was a transitional class, beginning its journey during an era of national consensus, graduating when all assumptions were in question. Through this tumult, the class grew into lives that made an enormous impact—in classrooms, examining rooms, courtrooms, board rooms, media, the arts, industry and public interest.
They’ve helped others, in their work, in their families, and when no one was looking. According to Class of 1969 Reunion Chair Chuck Durante ’69, the ensuing half century has made them richer in mind and spirit.

“When we were in 9th Grade, we voted to devote the proceeds of our year of managing Pooh Store to enable the school to purchase Charles Parks’ magnificent sculpture of the angel above the 1919 Auditorium, advancing the arts and adorning the school. Once again, we aim to help both society and Tower Hill,” Durante said.

With their 50th Reunion and Tower Hill’s Centennial Celebration due to take place concurrently in September 2019, Durante approached the Advancement Office last summer with an idea for a class gift that would endure to benefit the school and the broader community: a gift in the form of an endowed Class of 1969 Scholarship Fund.

Two other endowment funds at Tower Hill have been established by classes celebrating their 50th reunions. In 2007, the Class of 1957 established the Class of ’57 Financial Aid Fund “as a sign of our gratitude for the fine education, the friendships and other deep gifts we received at Tower Hill School near the start of our life’s journey,” according to the fund’s citation. In 2016 the Class of 1966 established the Class of ’66 “Of Wilmington and the World” Fund in honor of members of the Class of 1966 who were deceased at the time the award was established. Income from this endowment supports the “Of Wilmington and the World” Award which, as its citation states, “recognizes and honors a Tower Hill student in the Upper School who has demonstrated through superior academic work, extracurricular pursuits and a well-written essay, that he or she is an engaged citizen of the world, with a strong interest in and commitment to the world outside of Tower Hill.”

Needless to say, with financial aid and affordability a top priority of the Tower Hill 100 Centennial Campaign, the Advancement Office was not only on board with Durante’s suggestion for a class gift, but actively joined in the solicitation effort.
As shared in an email to classmates to garner support for the project, “This fund would support a student who would not otherwise have the opportunity to attend Tower Hill. In an era when tuition is forbidding, the school is more committed than ever before to economic and cultural diversity.” In the same email, he stated his confidence that their dollar goal “will soon be exceeded, and the fund will grow into a meaningful perpetual vehicle to provide opportunity for someone with talent and moxie, strengthening the school and its community.”

Thanks to Durante’s tireless volunteer efforts and personally approaching classmates for gifts that would be their class’s legacy at Tower Hill, the Class of 1969 Scholarship Fund did exceed its goal this past spring. As the Fund met the minimum dollar requirement to be converted to endowment, it will now be a permanent, self-sustaining source of financial aid support for deserving students, offered annually in honor of the generous Class of 1969 and their 50th Reunion. The first student recipient of the Class of 1969 Scholarship Fund will be named next year.

“Tower Hill needs to be accessible to students of all economic backgrounds,” Durante said. “It is incumbent on alumni from all classes to ensure this opportunity. The Class of 1969 is doing its part.”

Additional gifts to the endowed Class of 1969 Scholarship Fund may be made at any time. For more information on how to donate, please contact a member of the Tower Hill Advancement team.
Back
conversion=0&campaign_id=0&m=1&c=Tower_Hill_School_conversion&sifi_tuid=61379">