Lower School
About
Date Posted
No comments have been posted 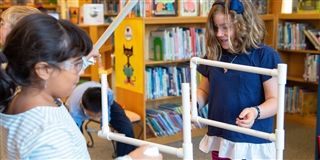 12/4/2019
By Amy Wolf, Assistant Director of Communications and Marketing
This article appeared in the Fall 2019 Issue of the Tower Hill Bulletin

A first grade class is spread out across the Lower School Library, each student with his or her own pile of supplies—recyclables, building timbers, LEGOs—ready to tackle the task at hand. The students have been told to create a structure with one door and one window. The rest is up to the students and their creativity.
“Makerspace” in the Lower School Library began in the 2017-2018 school year with one first-grade class as a chance for students to gain practical experience with 21st century skills like critical thinking, problem solving, collaborating, communicating in a physical way and working on hands-on projects. The students loved it.
“Students who typically perhaps struggled in a more traditional academic setting were really excelling, and students across the board were really energized by the chance to create and just have some choice in driving their learning,” Lower School Librarian Megan McCrery said.
That one class quickly expanded to both of the first-grade classes, and next year it will be offered to kindergarten through 4th Grade.
McCrery’s interest in adding makerspace to the library curriculum was piqued after she attended a number of conferences where a lot of people were talking about maker education. She did some research and found that the World Economic Forum, which puts out a skills list each year, named creativity as one of the top skills in 2019 and beyond, up from not even being included on the list in 2005.
“We’re moving from an information economy to a creativity economy, where the premium is on being able to create and being able to innovate,” McCrery said. “It’s really hard to give students, especially younger students, practical experience in applying those sorts of things in a real way, in a way that’s meaningful for them. So in makerspace, we give them the ability to actually drive that and get those practical skills. Because it’s something that you can’t really teach in a classroom; you really have to go through a learning process, and even a process of failure, to really get the ability to innovate, and we see that constantly with the maker projects.”
In a way, Tower Hill has had a makerspace since the beginning of school in the form of the woodshop.
“Makerspace is kind of the new buzzword now, and I feel like [the woodshop] has always been that,” woodshop teacher Richard Pierce said. “It’s a space where kids can come in and feel relaxed enough to create some of the different things they’ve envisioned. We use this space to essentially bring kids’ ideas to life, and it’s always been that space.”
Lower School Librarian Ann Sullivan said their first goal in adding makerspace to the curriculum was getting the students to think in a different way.
“What we really tried to do here was first create sort of a maker mindset to build on what [Pierce] has done in the shop for so many years,” she said. “We started with that maker mindset, just teasing out a few projects to get the kids thinking and learning in a different way, because often they’re not used to that. It’s really interesting to see some kids be like, ‘Wait, you don’t have a 50-page book on how to build this?’ or ‘You mean you don’t have a list of each step?’ It’s really different than what they’re used to.”
Pierce said he’s met very few students over the years who don’t enjoy creating with their hands, whether that be woodworking, ceramics, painting or any other artistic medium.
“To envision something in your mind and actually see it come to life through the work that you’ve put into it is probably one of the most rewarding experiences that any student or any person could have,” he said. “The arts in general are one of the most important aspects of any school. We have to find the right balance between rigorous academic work and work that allows students to express their own creativity.”
For McCrery, it’s also important to balance artistic skills with creative ones.
“In higher education and work life, employers are putting a huge premium on creativity—they’re demanding the ability of creativity and innovation and the ability to think creatively and think innovatively,” she said. “Makerspace gives students practical experiences where they can really hone those skills.”
Back