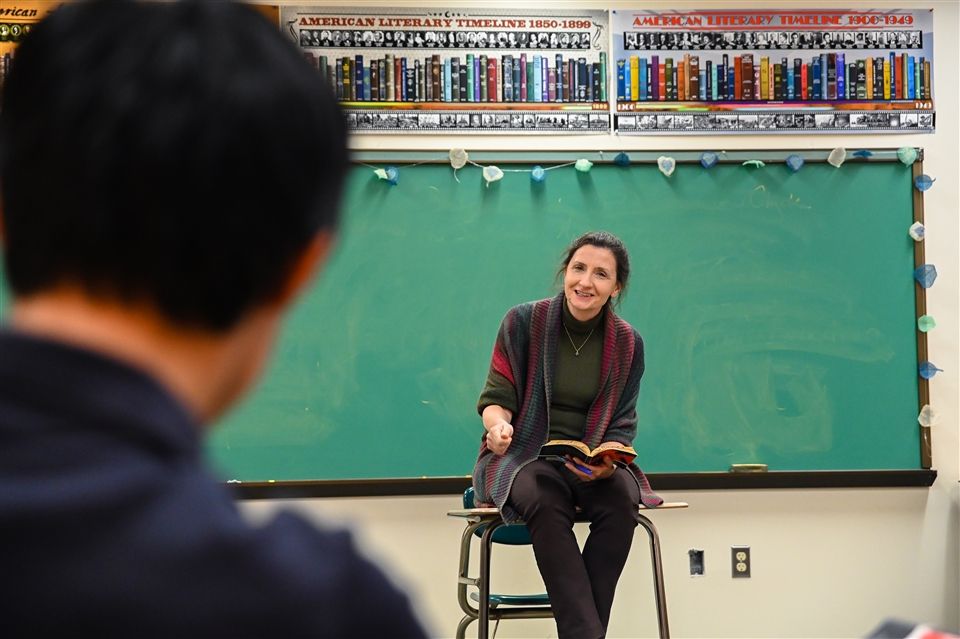 9/21/2019
By Coleen Hubler, Upper School English
When I first interviewed at Tower Hill, Hugh Atkins, then English Department Chair, asked me the department’s favorite interview question: “If you could develop an elective, what would it be?” I answered enthusiastically, “A course in horror literature.” I think my response surprised him for more than one reason. First, my primary focus in graduate school was Shakespeare’s contemporaries, including John Fletcher, Thomas Middleton and John Ford, playwrights of an era before the rise of Gothic fiction. Second, horror as a genre is often viewed as “non-literary.” A reader might select The October Country for entertainment on a dark, autumnal evening, but rarely do serious students of literature concentrate on horror.
Truth is, I’ve always loved a good ghost story. My Baba (grandmother) used to tell me folktales from the “Patch,” a small mining village in eastern Pennsylvania housing Ukrainian immigrants hoping for a better life in America. There, a dead mother visited her child nightly, keeping her little one covered, or a miner walking home late along railroad tracks provided a light for an infernal visitor’s cigarette. My sister, taking her first American literature class at college, used to read me the Gothic stories of Nathanial Hawthorne, Edgar Allan Poe and Washington Irving. I loved the idea of the headless horseman riding the wind in a blaze of fury after the unsuspecting Ichabod Crane.

As I grew older, I realized that these stories, whether folkloric or literary in origin, reveal elements about our culture, what people most fear or desire, the nightmares that we cannot confront in daylight but in the guise of the supernatural are “safe” for study. Thus, the folktale of the mother who returns from the dead reveals the very real fear of pregnancy-related mortality in the early 20th century, while The Headless Horseman of Sleepy Hollow examines conflict and greed as a new nation attempts to define its values. And, despite horror’s reputation, I learned that authors like Edith Wharton or William Faulkner, who are not generally considered interested in speculative fiction, often explored supernatural themes. Even my beloved Renaissance dramatists dabbled in the macabre. Shakespeare’s witches ensnare Macbeth’s heart; John Ford’s Giovanni holds aloft his sister’s heart on a dagger; Middleton’s Vindice murders a duke with the poisoned skull of his fiancée. All of these writers were skilled in their craft yet did not shy away from horror if it suited their needs, so why should I?

So, that is how Haunted Minds came to be. The class has become an exploration of our modern issues through the lens of Gothic literature. As noted horror novelist Tananarive Due asserts, “This is a genre that can really help us as a society confront anxieties, fears, transitions, obstacles.” So we investigate how gender roles confine and eventually drive a young woman mad in Shirley Jackson’s Hill House. We examine the monstrosity of racism in Victor LaValle’s The Ballad of Black Tom as he redefines the Cthulhu mythos. We reflect on the long-term effects of abuse in Sarah Monette’s Drowning Palmer. In all these cases, what I love is students’ willingness to take the dive beneath the surface of the texts. The supernatural draws them in; the real issues that frighten each of us keep them reflecting on our own humanity. For, like it or not, in horror we see ourselves, but we also learn how we might be better if we confront our monsters in the mirror.